From Surviving to Thriving

If the opening gambit of yesterdays key note speech at ACEVO’s ‘From Surviving to Thriving’ conference was anything to go by, then charity Leaders across the UK have a significant amount of work to do over the coming months and years to help restore trust and confidence in the leadership of charities.

Dr Pippa Malmgren kicked off the proceedings with a hugely thought provoking and insightful presentation on Understanding Leadership in the 21st Century. She suggested there has been a huge breakdown in public trust and confidence in leadership globally – across all sectors. The challenge now is how to reverse it.

As a former presidential adviser, joint author of ‘The Leadership Lab’ and adviser to the UK government she will I’m sure have seen first hand how trust and confidence in leadership has been eroded. She offered some great views and ideas on what leaders now need to do to reverse the trend.

A need to play all the leadership keys

The stand out thought for me was how today’s leaders need to get better at ‘diversity of thinking’. There is a need for all to learn to play the full range of the ‘leadership keyboard’. The raw numbers (the P&L) sit at one end and compassion and empathy sit at the other. Great leaders need to be able to play the full range of keys and become much more adept at moving up and down the keyboard to ensure they are ‘not just measuring the maths but also the mood’. 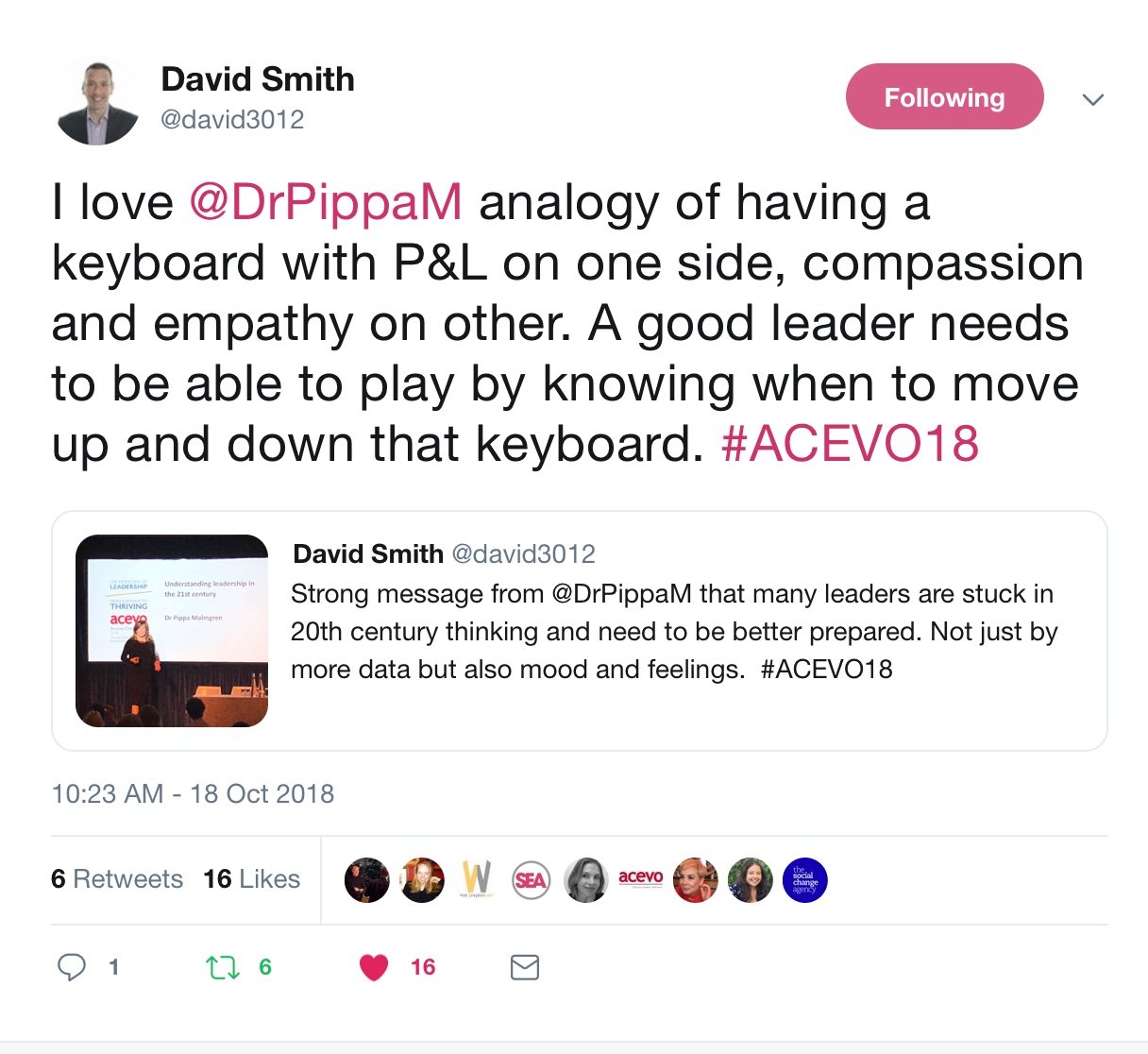 Heart and head both matter in decision making and Pippa suggested that not enough decisions are taken at the compassion and empathy end of the scale. She warned the audience that ‘too much of a focus on the maths leaves us blind to the mood’.

Pippa went on to talk about the scale of the technological revolution that the world is in the grips of, comparing it to something that will be bigger than the industrial revolution. The role of the leader will be fundamental and those who fail to embrace technology and digital opportunity will be left behind she said. Having taken a separate look at the work that Pippa is doing around AI and robotics she is more than qualified to make such an impassioned statement.

How leaders and charities are using technology, and particularly developing their digital ambition, is something I am also enormously passionate about. There are some great examples within the charity sector, a number of which we heard about at some of the conference breakout sessions yesterday. The session on ‘What digital leaders need to know’ was particularly pertinent. Led by Zoe Amar and Mark Galloway there was an enlightening debate around how CEO’s should use social media, with a healthy mixture of views in the room on whether all CEO’s should be taking the plunge on Twitter.

As an ardent fan and passionate advocate for the growing SocialCEOs movement I have a simple view on this. Using social media should be a line in the job description of any CEO.

It was heartening therefore to hear that this was a view also held by Dr Pippa Malmgren. She very eloquently stated that ‘too many leaders (particularly in their 50’s and 60’s) tell me they don’t do technology’. Pippa’s no nonsense response to this was great – ‘if you don’t do technology, technology will do you’ she said and suggested that leaders who ‘don’t do Twitter’ just need to ‘go and work it out’.

The digital leader breakout session also gave me some great new viewpoints and helpful food for thought about why some leaders are yet to embrace the social media opportunity. As a contributor to a new book currently being written on SocialCEOs (to be published by Bloomsbury business books next year) the debate and discussion gave me some great new fodder to include.

Other sessions I managed to get to were Matt Hyde, CEO at the Scouts who delivered an excellent session on Leading cultural change in your own organisation. A number of stand out quotes both from Matt and the floor, my favourite being Matt’s view that ‘your top team are the lightening rods for your values and culture’. Getting this right is critical and needs to be led by all. I also pitched in with some advice once given to me by a great charity chair. His wise words were very pertinent to me at the time I was leading an organisation through a significant period of cultural change – ‘If you can’t change the people David, then change the people’ he told me.

I also loved the session on Driving change for future impact delivered by Mark Atkinson, CEO of Scope and Lisa Quinlan-Rahman Director of Customer Strategy also at Scope. They have led a bold new direction for the organisation refocussing what they do to ensure they are delivering the greatest impact for the greatest numbers of people. I loved the suggestion that the greatest risk they faced was doing nothing and staying the same.

The final hurrah was led by Jo Youle CEO of Missing People. She was admirably filling in at the last minute for Margaret Aspinall (Chair of the Hillsborough Family Support Group). Jo took us all on a rollercoaster of laughs, emotion and so much rich food for thought about never giving up. She was brilliant – a great storyteller (and Tedx talker) who moved us all. 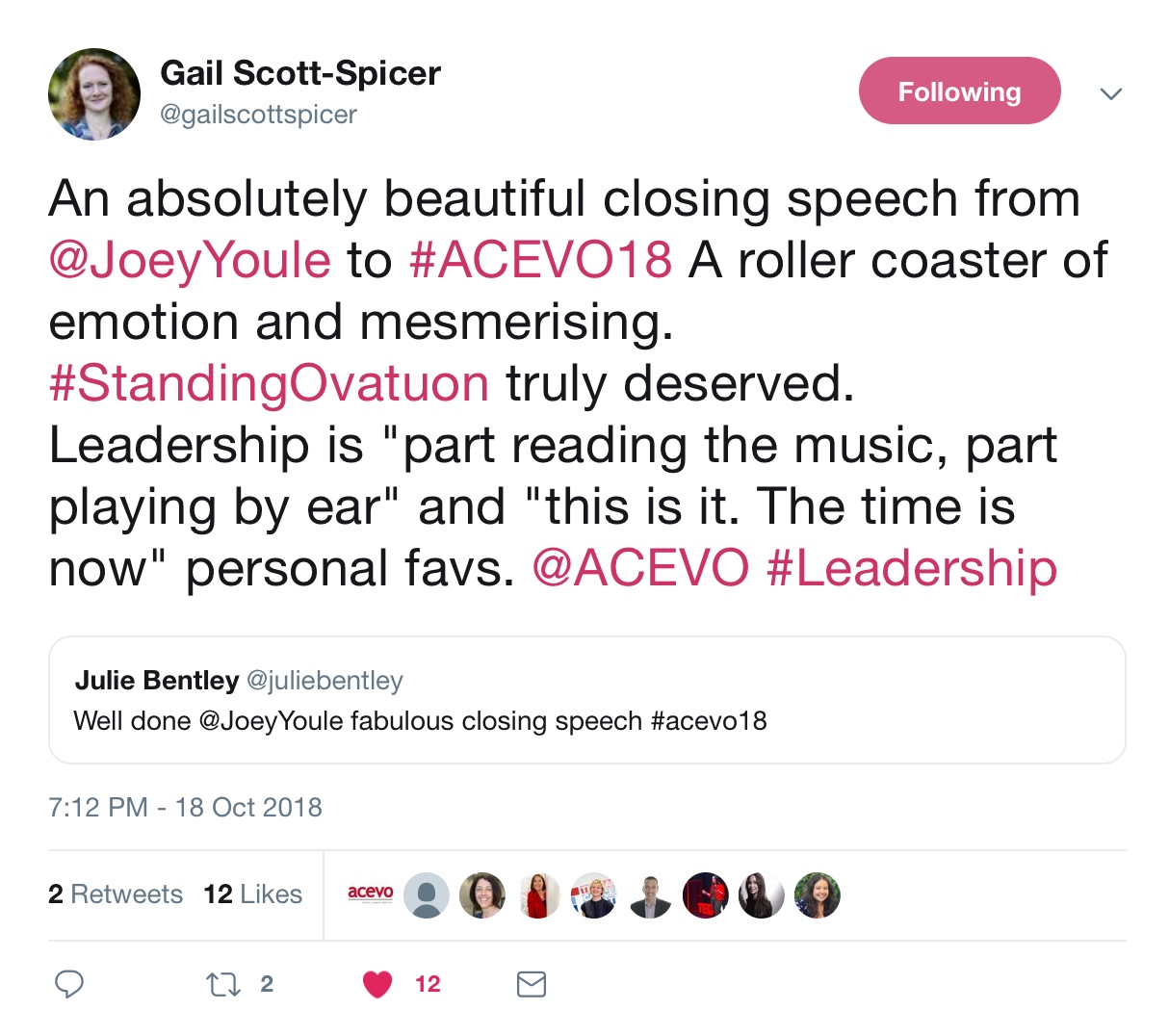 My single greatest regret for the day was being unable to clone myself to sit in so many of the hugely relevant breakout sessions of the day. Having been a delegate at ACEVO conferences for a good number of years this one definitely had a new freshness and buzz about it – congratulations to Vicky Browning and the team.

There are some great things happening at ACEVO. Over the last year I have seen the organisation begin to take a really hard look at itself in order to ensure it is the most relevant it can be for charity CEO’s everywhere. Their work is a great example of the theme of yesterdays conference and it’s most encouraging to see ACEVO practicing what they preach by working hard to move from Surviving to Thriving. 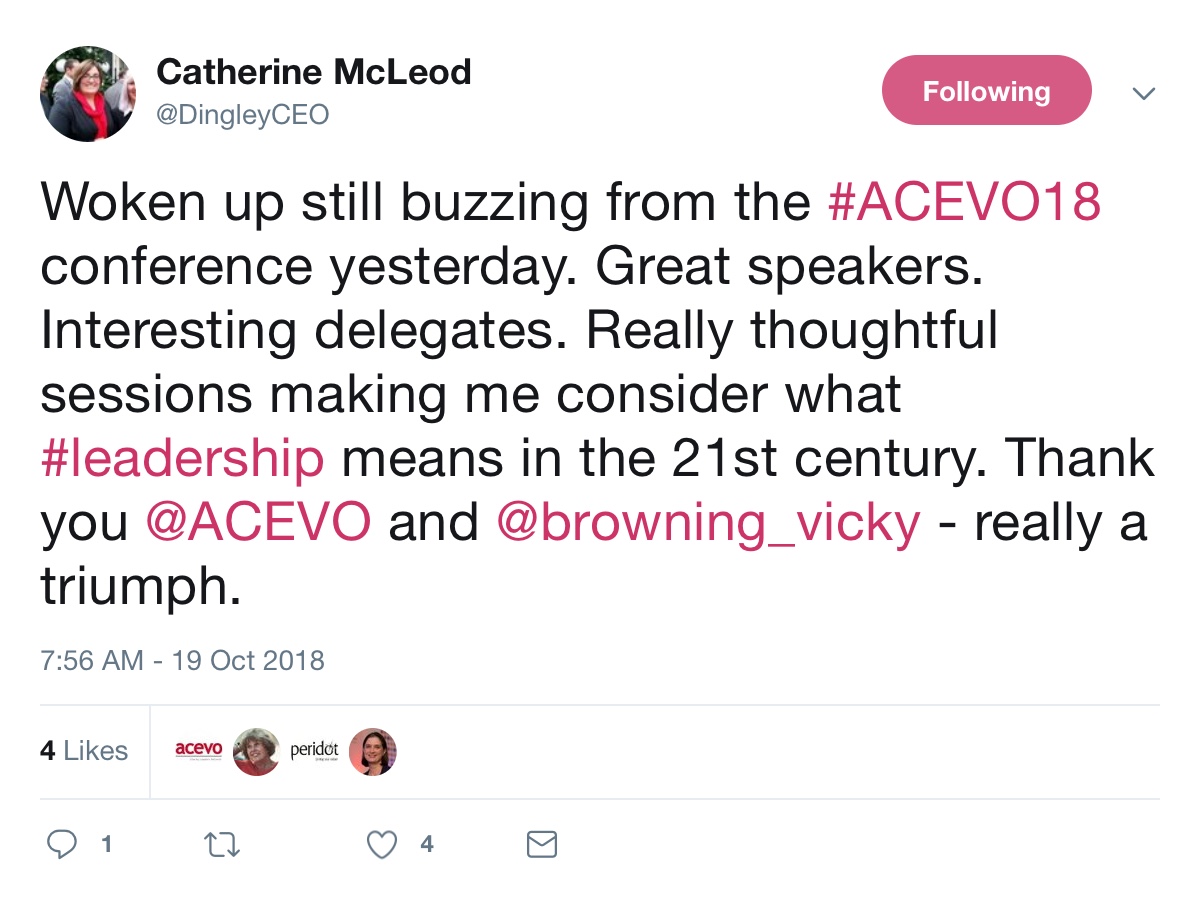 In the last tweet of the day from Vicky Browning she said ‘I wanted today’s event to reflect what we are and who we’re here for – I hope we did’. Mission accomplished in my view.

A BIT ABOUT ME

Founder of Thrive Consulting and part-time charity CEO. Passionate about helping charities and not for profit organisations across the UK to Thrive.
With over 25 years experience I support people and charities to be the very best they can be. I set up Thrive Charity Consulting in 2018 to offer a wealth of insight, experience and expert advice to charities of all sizes across the UK. We help people to solve problems, overcome challenges and maximise individual and organisational effectiveness.

Contact us to find out how we could help your charity.

The value of a mentor

Reading Time: 2 minutes Topic: Leadership Leadership is a lonely place Anyone who is, or has been a CEO or senior leader will recognise that leading an organisation can be a lonely place. Whether it’s Read more… 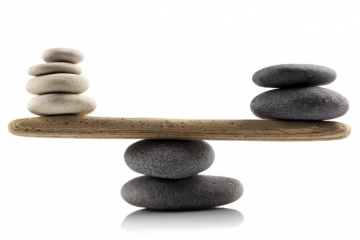 Reading Time: 3 minutes Blog Topic: Board Effectiveness I have just finished working with an organisation where the main focus of the work has once again been helping the CEO, Chair and the Board to Read more… 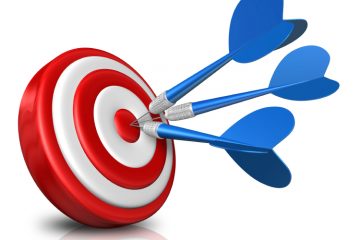 How effective are you?

Reading Time: 2 minutes Blog Topic: Personal Development/Leadership Recently I have just finished working with an organisation helping them to identify how to improve their effectiveness – both collectively as a Board as well as Read more…